Gardaí were conducting a checkpoint on Watling Street in Dublin city when they stopped a taxi with a passenger onboard.

The driver was arrested by officers on suspicion of driving under an intoxicant. 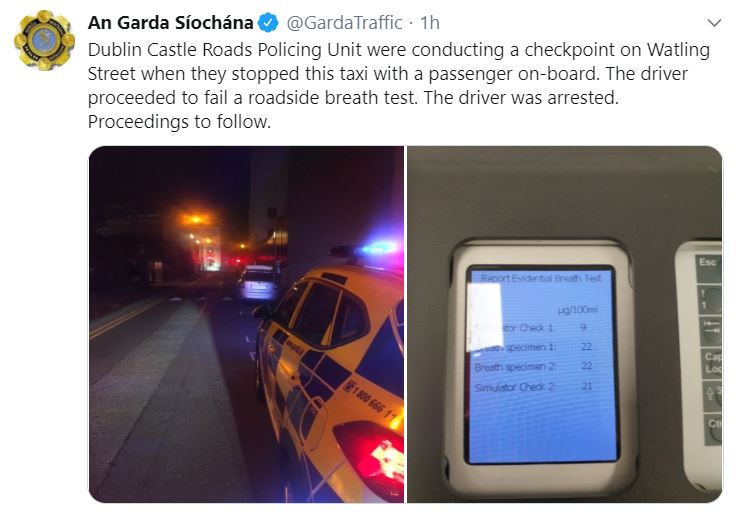 The Road Traffic Act 2006 allows the Gardaí to breathalyse the drivers of vehicles without the need to have formed the opinion that the driver had consumed an intoxicant.

Penalties on conviction for drink driving vary depending on the amount of alcohol that has been detected.

The maximum penalty for drink driving is €5,000 or six months in prison or both.

The court will also take into account whether this is your first offence or otherwise. Under the penalties introduced by the Road Traffic Act 2006 all convictions for drink driving carried a mandatory disqualification from driving.

If you hold a valid licence/permit at the time of the offence and your alcohol level is below a certain limit, you will be issued with a fixed penalty notice.

You are not eligible for a drink driving fixed penalty notice if you have received a similar notice within the previous three years.

If you have a story or want to send a photo or video to us please contact the Derry Now editorial team on 028 7129 6600 for Derry City stories Or 028 7774 3970 for County Derry stories. Or you can email editor@derrynews.net or editor@derrypost.com at any time.

Derry man writes a 'Christmas Cowboy' song for his sister